Since coming to Uganda I’ve become more crafty, not in the sly, backhanded way… at least I hope not, but rather in the fact that I’ve taken to making things. I’ve always been a fan of arts and crafty type things, a trait I’m pretty sure I have inherited from my mother. During my university years while other people were busy nursing hangovers on a Sunday, I tended to engage myself, and others, in ‘Sunday make and do’. More often than not this took the form of baking, after all the benefits are more conducive to a hangover cure than an oven baked key ring or little alien creatures made from glittery pom poms. However, at home I generally don’t have the time or the motivation to get artsy but with more time on my hands here I’ve found myself once more surrounded by card, glue, scissors and material. I’ve even started sewing up torn pockets and darning socks, which makes me feel if not a little bit virtuous, slightly Victorian!


Despite the sunny weather, lack of Christmas street lights and chocolate advent calendar I have fully embraced the festive spirit this year. I am generally not all that fussed about Christmas, or perhaps it’s just that my level of Christmas spirit pales in comparison to that of my sister who would become a Christmas elf if she embraced the spirit of Christmas any more. However, come December 1st as I opened my advent cards (yes, my mother somehow found cards which double as advent calendars!) and set alight to my advent candle the spirit was ignited. Therefore my artistic attentions have recently been firmly focused on making festive treats.
Firstly, I made some Christmas decorations from twigs and raffia. This involved me going around the local market trying to describe raffia to local people in the hope that they had any idea of what I was talking about. They didn’t. Luckily, my friend Martin came to the rescue and within 2 minutes of meeting him he had secured the required raffia for me. He’s a good chap and even helped me collect the twigs I needed. This is made more heroic by the fact he accidentally stood in a puddle of urine in his quest to help me. 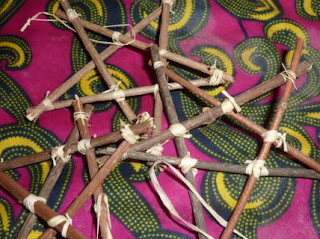 After getting the necessary goods I took the twigs, made a vague star shape and began binding the twigs together with raffia. This is actually a bit harder than you think. I thought it would be easy, alas no. Several twigs snapped because I was bending them in directions they didn’t want to go. Then the winding of raffia when the star is almost finished is a particularly fiddly process, one made worse by the fact my neck felt like it was on fire after doing the first couple of stars. Still, all’s well that ends well and the finished products actually look kind of ok.
Not content with stars, I then moved on to Christmas cards. I’m not sure if it’s customary to send cards here, I’ve seen a couple of greetings cards in Kampala but even these looked like they were aimed at tourists sending them home. Besides, I was in a crafty mood. So armed with some card, scissors, a pen, paper glue and some scraps of kitenge that I had bartered with local tailors for, I began. The cards were much more fun to make than the stars. Firstly, I made different designs and colour was involved. I would like to make a note here that whilst I did have several, albeit basic, materials at my disposal, I did not have an eraser. Therefore some of the cards have some pencil sketchings that are visible. I like to think that this adds to their rustic charm.. hopefully those receiving them will think so too!

The name of this entry was pilfered from a craft shop in Cardiff, Wales. I'm sure they won't mind ^_^
Posted by Ali in Wanderland at 4:00 PM