It’s funny how things turn out, yes, sometimes funny ha ha, but more often than not just odd funny. Around a fortnight ago an old school friend who I had lost touch with, contacted me via the medium of social networking. There is a lot to be said against social networks and I too at times find them highly irritating – no, I do not want to join your pirate gang/ learn which dinosaur I would be / find out my friend’s inner secrets by their underwear colour. However, they have their uses. After all, without facebook it seems unlikely that this friend and I would have been able to reconnect.

Facebook, for all its faults, and please excuse the cliché, is making the world a smaller place, and it definitely makes keeping in touch with old friends, colleagues and acquaintances a lot easier. But there are still people who are not on it and there will inevitably be those who slip through the cracks and you still, despite best intentions, lose touch with. Unfortunately this was the case with a friend whom I learnt a couple of days ago had died. Although I had not seen this gent in over a year (being on separate continents certainly helps with losing touch) it feels very odd to think that there is no chance that we will one day bump into each other as we did the last time we met. In fact that was a pretty good night, which involved rather a lot of dancing, the consumption of copious amounts of waragie (potent Ugandan gin) and bitter lemon and inevitably, quite a bit of sweating. He was only a young man in his twenties and his death still feels quite unreal.
Once more life proves that it is all just swings and roundabouts, an old friend found and another lost. What does this teach us? Well depending on who you are I’m sure you can draw your own numerous and varying conclusions. For me it’s a simple reminder of the unpredictability of life and death…and if it really is all swings and roundabouts you might as well just go and play in the park. 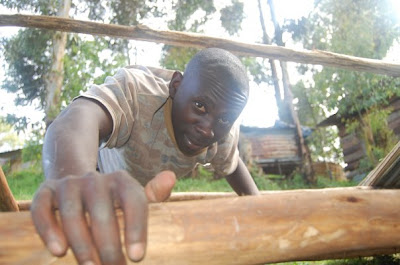 This entry is in memory of Willy Musinguzi.
Posted by Ali in Wanderland at 11:00 PM