Sometimes I am genuinely shocked by what I see in the newspapers here in Uganda. Yes, by all means report the facts but there are ways and means. Like in most countries the quality of journalism relies heavily on which paper you chose to read but even in the most ‘journalistic’ of papers, the facts are often depicted in an unnecessarily blunt or brutal way, or in an oddly casual manner even when dealing with particularly sensitive subjects. 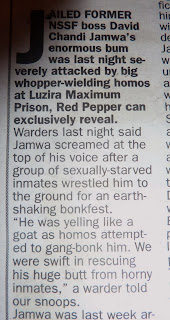 At the lower end of the journalistic scale slang terms are used in such abandon that a) it can be nigh on impossible to read the article without a colloquial dictionary at hand and b) even matters that are actually rather serious are made to appear comical.  A prime example of this was the case of former NSSF boss David Chandi Jamwa. As the article shows, Jamwa was being raped in prison and yet the paper just makes a joke out of the whole situation. This is even more baffling considering that homosexuality is actually a crime here and the ‘Pepper has previously ‘revealed’ known homosexuals.
Whilst articles are dubious it’s the pictures that I find most shocking. Whereas in the British press, if a child was murdered there would most likely be  a picture of said child in happier times, smiling, healthy. Not so in Uganda where no holds are bared. After the July bombings in Kampala the papers were filled with pictures of decapitated bodies, people slumped in their chairs, scenes ravaged by the bombs. The most harrowing picture was probably a before and after shot of a young girl in her early 20s. The first picture depicted a smiling, vivacious young woman. The second, a blood soaked body with essentially pulp where her head should have been. I won’t put this images here, firstly I don’t have the copyright and secondly I wouldn’t want to inflict them upon you.
I can only imagine what her family and friends must have felt at seeing such pictures splashed across the national papers. In another article about a toddler who had been kidnapped by a witch doctor and subsequently had his penis removed before being rescued, they papers printed a picture of the boy post ‘surgery’. In years to come that boy will have enough to deal with, without the knowledge that his picture appeared in the papers when he was at his most vulnerable. I don’t agree with censorship in the press, but I think there should be some kind of boundaries when it comes to harrowing images. The stories themselves should be able to paint a clear enough picture without resorting to such explicit photographs.
Posted by Ali in Wanderland at 5:05 PM