As discussed in the first part of Life’s Little Aspects, it’s often best to put your preconceptions aside when it comes to life in East Africa as things are definitely not always as they seem.
Openess
If there’s one thing that can be said for Ugandans as a whole, they’re honest, sometimes brutally so. I would never ask the tempting question “does my bum look big in this?” as I would probably be told not only did my bum look big, but the fabric was horrible, my hair not coiffured enough and that I was too big generally and needed to lose some weight. However, even without enticing questions don’t be surprised if people give their honest opinions without you asking for them.
Physical contact
It is perfectly acceptable to fall asleep on a stranger’s shoulder on the bus, for two men who are friends to hold hands or indeed bump and grind in the disco and hugs and prolonged handshakes are standard. However, if you are in a couple, physical contact is to be kept to a bare minimum, no longer is hand holding acceptable and if you risk a kiss make sure it’s fleeting and away from prying eyes (otherwise you might just end up in one of Uganda’s tabloids). 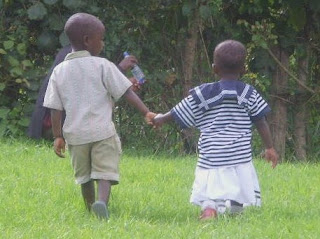 Roads
Outside of Kampala very few roads are tarmaced in their entirety which can make long bus journeys anything from interesting to vomit inducing. Often roads are not actually wide enough for two large vehicles to pass causing one, generally the one who is a little less brave of heart, to veer off into dust lay-bys.
The nature of the red clay roads largely means that during dry weather the dust whips up and visibility is seriously affected and during wet weather the roads are constantly flooded and pot holes crop up at an alarming rate.
Restaurants
Forget about your image of a restaurant, most here look like people’s front rooms. They’re generally pretty small, with sofa/chairs and low tables. One of my favourite local hotels is Francis’ Joint – basically because the food is ludicrously cheap and tasty- meat and chips with cabbage/lettuce is 2500 (about 70p). Joyce, the owner, also makes a mean  (and I’m convinced, slightly addictive) chilli paste that only the foolhardy would try more than a smidgen of at a time.

There are 3 types of time here.
European time: this is when you say 5 minutes and you mean 5-10 minutes. You know, the normal time frame that people in the West adopt. However, depending on how long the international has been in Africa depends on how ‘African’ their European time becomes so the system isn’t always reliable..


African time: Sooo, African time is laid back. People say “10 minutes” but what they really mean is “sometime within the hour”. Meetings never start on time, and I mean NEVER. I have waited for over an hour and a half before for someone who said they would be ‘just back’ to return, I left before they reappeared.
Moses times: there is a local guy here called Moses, he works on the most          African time scale of all, even locals here think he’s slow... and that really is saying something!

Transport
There are various types of transport here, some I seriously wish were adopted back in Britain as they would make a heck of a lot easier!
Boda boda Bicycles: bicycles that carry passengers on a green and blue (almost uniformly those colours) cushion attached to the back of their bike. Often used for short journeys and very cheap. However, unused by me, I figure that if I’m going a short enough distance to not warrant a motorbike I can jolly well walk.
Boda boda motorbikes: are the most sensible transport solution ever, perfect for getting to places quickly, travelling medium distances and taking you home after a night out.
Matatus: Minibuses generally licensed to carry 14 passengers, it’s almost unheard of for them to have less than 20. Largely for moving between towns although in Kampala they are a cheap way to get around the city, although due to the endless traffic jams, not always the quickest.
Special hire: the equivalent of our taxis, generally reserved for times you have a lot of luggage or a lot of people, otherwise boda boda’s are used.
Bus – the cheapest way to travel long distances. The post bus is the most reliable and least likely to crash, it also sets off at a specific time meaning that you don’t have to wait around for hours slowly getting stuck to your seat by sweat whilst waiting for it to fill up. For those not wanting to leave before dawn Horizon is your best option, Gateway and Kibungo are best avoided in my opinion

Washing: One of the first lessons I learnt in Uganda is that you can never expect your feet to be clean. It doesn’t matter how much you scrub them within a matter of minutes they will be dirty again, it’s easier just to accept it. Both washing of body and clothes is done in cold water which makes the former a certainly brisk experience and the latter that little less enjoyable. I have long given up on trying to use washing powder and now prefer the incredible power of blue star soap. I’m convinced that if you left your clothes soaking in a tub of water with blue star for too long they’d just disintegrate.

Weather: So you think of Africa and you think of bright sunshine, especially in countries on the equator, right? Wrong. Kabale is really high up, around 2000 metres above sea level and it rains here... a lot. Of course it does get sunny too but it rains on average 6 times a week, so much for being beautifully bronzed on my return home!
Posted by Ali in Wanderland at 5:30 PM